What is the Preview-Publish-Transport Phase in the EdgeReady Cloud?

Ideally, any app development process follows a series of steps:

The Preview/Publish/Transport section is accessed once all the stages of App Development are complete. The icons can be found on the top right of the App Process Modeler canvas.

Why do we need the Preview/Publish/Transport Section?

In the EdgeReady Platform:

How to do an App Preview?

If Preview is clicked, the following screen popup appears: The deployment platform and device preview is chosen. 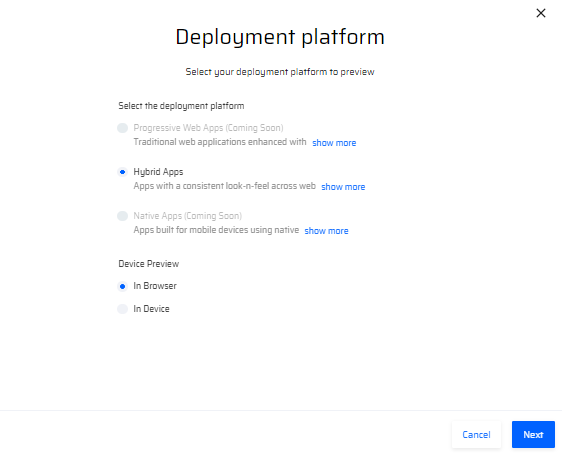 In the current version, the Preview/Publish/Transport option is available for Hybrid Apps only.

On selecting the Preview, an intermediate screen appears.

The preview of the app screen is displayed. The preview option is available for different devices.

How to Publish the App?

Once the App screens and settings are previewed and verified, it is ready to be published. The user clicks the Publish button to publish the App. The following popup appears.

The user selects Next. The next popup requests for details of the App. The version number for the publish has to be specified along with the comments. This enables the same App to be published multiple times.

Once all the fields are entered, the user clicks Publish. The progress is displayed in the next popups.

Once the App is successfully published, the final popup is displayed with instructions to download and access the App.

How to Transport the App?

Once the App is previewed and published, it undergoes two stages where the App is Transported from the Development environment.

To transport the app, the user clicks the Transport icon. The following popup appears.

Clicking the Transport button moves the App with the respective version to the Quality environment. In the next popup, the respective Roles, Apps, and Screens are checked.

Once it is transferred, the following popup appears.

After successful transport, users can log in to the Quality Environment with their credentials and check the new App with their respective version.

NOTE
The user can refer the Mobile App generation document for a detailed procedure to download the App.

In the quality environment, the new projects that have been transferred appear on the dashboard with a "New Commit" highlight.

Users can select the Projects and redirect to the App Process Modeler section where they can be Approved/Rejected by the Admin.

The following screen depicts how the transported Project appears on the App Modeler canvas. The Admin can Accept or Reject a Project after verification. In the below example, different versions of the same project are approved and listed.

NOTE
For different versions of the same Project, the Quality/Production Environments support only a single Active version. For instance, if one version is made active, the remaining versions are made inactive by default.

Accepting the Transport follows the steps:

The version with comments are entered.

In the next popup, the app elements are checked and verified. Once checked, the user clicks Accept. Accepting the Project enables the transfer Process.

Once the Project is successfully transferred, it is listed along with the previously accepted Projects on the left. Users must note that the current version of the project became the Active version.

The active Project can be Approved or Rejected. Only Approved Projects can be transported to the Production Environment. 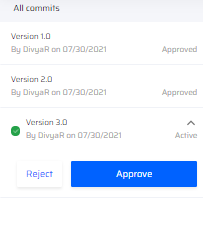 Once the user clicks the Approve button, the following popup appears.

By specifying the version number and comments, the user can Transport the Active App to Production. This step follows another approval process where the App elements are verified once again.

Once Approved, the Project is transferred to Prod and displayed in the list of Approved Projects on the left.

NOTE
The Admin cannot alter or preview the contents of the Project that have been Transferred to the Quality or Production environments. They can only revert changes (to previous versions) and verify the existing contents.

On verification, if the Project does not meet the required standards, the user can click Reject. This process is displayed in the popups below.

If a particular version is Rejected, the previous version becomes the active version by default.

Was this article helpful?

By entering and using this site, you consent to the use of only necessary cookies to enhance your site experience and improve our services.